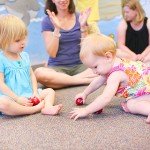 At Carson’s 15-month-old check-up, he wasn’t pointing, he wasn’t clapping very much and he rarely waved goodbye. He had his dozen words but that was about it for him, verbally. He was walking on his first birthday and I knew his was extremely strong. While teaching my Village classes, I observed a 15-month-old who knew her animal sounds, plus plenty of babies who could point to body parts and wave. This was the first time I started thinking about ‘the spectrum’. Thoughts of Autism and Aspergers came into my mind. Do I need to get some help and if so, how soon? We talk about how kids are all over the spectrum developmentally – some walking at 9 months and some not until 18 months. Every child develops at his or her own rate and will learn when he or she is ready. That was ok for every other child, but for MY second child, I became extremely concerned. The doctor reassured me that it was ok and that we would check for the same indicators at 18 months.  I was the mama hawk and watched – no, analyzed – his every move. Then at 17 months when he climbed up the playground apparatus that most kids don’t attempt until after 2, I knew we were onto something. You see, Carson was busy building his gross motor skills – climbing and wrestling and jumping on the trampoline. Those other skills were secondary. I worried a lot and talked about it often but it wasn’t too long before I shut those thoughts out. I knew the answer was simple. The best therapy for him was Kindermusik. I would be able to see how he lined up socially, cognitively, verbally, and physically.  I thought, ‘Just keep him in a Kindermusik class and I’ll start to see changes’. So that’s what I did.

This fall as we enrolled in Our Time, I was so excited about the new activities we would get to share together – dancing, instruments, circle dances, exploration. He was going to sit in my lap during the hello song and gently gather instruments for us at the appropriate time – or so I thought. My first child achieved that under my instruction, why wouldn’t the second?! Since Carson came out of the womb, he was loud and energetic. It wasn’t long before I realized I had a kin-esthetic learner. For him, that means in order to learn, he must be moving. While I knew that from my Kindermusik teaching experience, I had never seen it so lived out. This child was constantly moving and was extremely happy when he was doing so. He was ‘the runner’ in the class. Thank goodness it was a small class! I could now empathize with those mothers of runners that were in my classes in years past. My eyes were opened and I could not judge. It has nothing to do with whether I’m a good mom or not but has everything to do with his learning style. So Kindermusik was the perfect place for him. I decided that semester that I wouldn’t be dressing up for class. No, it was workout clothes or sweats because that’s exactly what we would be doing. When it came time for instrument exploration, he didn’t ‘get 2 for you and 2 for your grown-up’,  like I’d been teaching all the other children for the past 6 years. He just liked to shuffle them in the basket. Gathering 4 of the instruments didn’t come until the beginning of our 2nd semester. He didn’t tap high and low or copy my example. He wanted to explore cause & effect by ‘releasing’ the sticks. And again, it wasn’t until the 2nd semester when he started tapping them together. So I’ve learned yet again, in another area of life that my timing isn’t always his. The important thing is not when he did it but that he did it.

In the last few weeks, Carson has learned the song, “Head, Shoulders, knees & toes” and I’m happy to report he now points to all those body parts. But it wasn’t until he was moving while singing that song, that he was able to label each part. He has also added, “Winkle Winkle wittle ar” to his repertoire and it wasn’t until he voiced that song, that he was able to string four words together. I love the power of music in our children’s lives and it is one of the greatest joys I’ve experienced as a mother. Kindermusik has grown Carson and helped him develop in every area, but it has also grown his mommy. Our time together has taught me to love him where he is, be patient to see where he is going, and to just keep singing.

Tonight, as his big brother and Daddy were leaving, Carson waved from the front porch, belly sticking out, and in a very happy, loud voice screamed ‘bye bye!’ as if he’d been doing that all his life.

This post brought to you by Miss Jennifer, who loves her job loving your children.