Most of us have the privilege and means to give our children every that they need–and more–to succeed in life.

The vision of the Vo 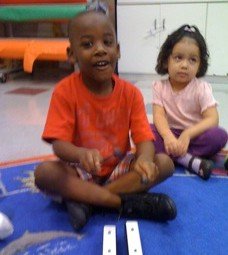 gel Alcove Preschool for Homeless Children is to provide the youngest children of homeless families with the foundation for success. As a non-profit organization since 1987, they offer homeless parents a safe place to leave their children while they work to rebuild their lives. Did you know that kids from the preschool group were less likely to be arrested and more likely to have a job? Among those with jobs, those who went to preschool made more money than those who did not. (NPR did a podcast on the case for preschool here.)

Each week, one of your trusted Kindermusik educators donates her time at Vogel Alcove Preschool for Homeless Children. We aren’t sure who has more fun on Fridays–these wonderful children or the Kindermusik teacher who gets all the hugs and smiles.