“For every hour in front of a screen, 52 minutes less time is spent interacting with a parent.”—Screen Time Warnings from the AAP

So what’s wrong with a little educational programming or a great app here and there?

The issue is not what your child can gain by using electronic learning apps or watching an educational video, but what is your child missing by not learning these same things without the aid of electronics?

What happens in the first five years of brain development sets the course for the rest of life. If imaginative play, discovery and interaction are cultivated at this age, then everything else will fall into place later. But if free play and imagination and creativity are squelched at this formative age, later learning will be hindered.

When children are engaged with screens, they are not playing, discovering, interacting in a way that nurtures their brains and bodies.

So, what exactly is lost when a child plays with electronics rather than open-ended toys with parental interaction? A mom was recently quoted in the Denver Post describing how her three year old is learning her letters through her iPad app. She says, “She’s recognizing more of her letters and starting to draw some of them as well.” 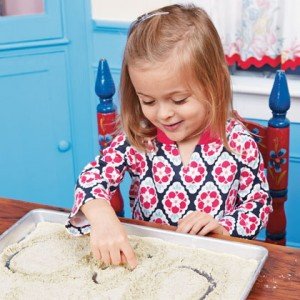 But, let’s imagine together what this child could learn without the device:

Think about it—put your child (or yourself) in front of a Swedish newscast every day for a year.  Any chance she’ll come away speaking or understanding Swedish? Alternatively, grab your child’s toes and play “this little piggy…” using the most complicated words in any language and the child will learn it, with delight! Why? Because you’ll be combining touch, facial expressions and emotional connection all in one fun loving activity.

And that is what a child is missing when interacting with electronics instead of humans.

This post brought to you by Miss Lisa who advocates “this little piggy..” and many more such exercises to grow those little brains!

This is part of an exclusive four part series entitled, “Less Screen Time, More Face Time.” Read the introduction post here and check back on Mondays for future installments.