Have you noticed a bit of a snack epidemic in the toddler world? Snacks at the grocery store, snacks while watching a show, snacks at play group, snacks after the soccer game, snacks at story time. With so many snacks, it’s no wonder they aren’t as willing to finish a meal or try new foods–hunger may not be a feeling with which they’re entirely familiar. The snacks they are offered aren’t always healthy snacks, which makes it difficult to keep track of just how much sugar is being consumed. Chances are–too much!

“Our children are being offered food at every turn. And adding just one extra snack each day can make a big impact. In fact, it’s possible that childhood obesity is driven by as little as 165 extra calories a day for kids ages 2 to 7, say researchers at both Harvard and Columbia universities. That’s roughly the amount in a handful of potato chips.” –Yoni Freedhoff, M.D.

Then there’s the etiquette of snacking. Isn’t it still a rule of thumb that in a group situation, if you don’t have one for all, then it’s rude to eat in front of others? And what about public places like the library or the museum? Shouldn’t we keep food and drinks confined to eating areas out of consideration for keeping things clean and neat for all?

“Toddlers and preschoolers can go two to three hours between meals and snacks, older kids three to four. As much as you can, avoid on-the-go snacks — in the car and the stroller, in the shopping cart, or as you’re going out the door. Grazing this way makes it harder for kids to eat the right amount because they’re so distracted. Mindless eaters don’t have the chance to really savor food or pay attention to their body’s hunger or fullness signals, so they often end up over- or under eating.” –Sally Kuzemchak, R.D

While most pediatricians will tell you that a toddler will eat when they’re hungry, the key is offering wholesome food at designated times, and in designated eating places. Food needs to be eaten when it’s offered, or if they choose not to eat it, then their next opportunity to eat is at the next offering. Popcorn in the family room for a movie should be a treat, not a rule.

“‘One small sweet treat a day can help teach kids about balance and to not see sweets as forbidden foods that become even more alluring.” –Kathy Isoldi, Ph.D., R.D.

Ultimately, we want them to make independently healthy food choices. A good at-home exercise: Put up a food pyramid poster and let kids put a sticker on the food group they are eating, if it’s not a real food, no sticker! Kids and parents can see what they’re actually eating and drinking.

There can be a lot of social pressure for children to behave in certain situations, but ultimately, we all know that children are children and comforting them with food is not a healthy choice. Extreme situations call for extreme measures (read: plane trip) but as a daily practice, we ALL could probably use a little snack smarts! 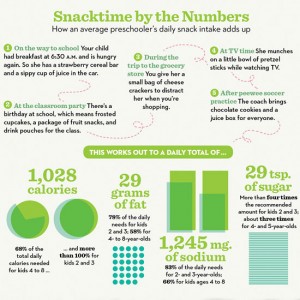 This post brought to you by Jenny Leggett, who needs to get her own food chart and stickers–is there an app for that?