How can Kindermusik teach my child to read? 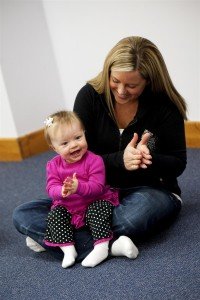 Long answer (for those who like research and detail):

Phonological awareness is a growing recognition of the sounds that make up a language. Recent research has confirmed that phonologically aware children begin school better equipped to learn how to read, and also with an appreciation of sounds and the meanings of words. Songs with rhyming words and nonsense syllables are enjoyable ways to heighten a child’s awareness of the sounds of language.*

“Children must be aware of the rhythmic flow and form of language before they can speak full and organized sentences. From the time they are infants, they listen to the sounds of speech and begin to produce words as they grow into toddlers. By exposing children to rhymes, they begin to absorb and understand the organization of language.”
Phonemic Awareness in Young Children, by M. Jager Adams, T. Beeler, B. R. Foorman, and I. Jundberg

“…By incorporating fingerplays and rhythmic body movements into nursery rhymes and stories, we can keep these youngsters’ attention by allowing them to be active.  In the process, we also enable them to remember new words by association with movement, and we give them an opportunity to exercise new fine and gross motor skills.
“Nursery Rhymes-More than Fun” by Janice T. Gibson
Nursery rhymes, whether spoken or paired with tunes, are indeed musical and rhythmic.  They also tend to be short and, thus, easily repeated.  And, of course, they lend themselves naturally to accompaniment with playful games.  All this, combined with the good feelings adults tend to experience passing along rhymes and songs of childhood, make the sharing of nursery rhymes a rich learning experience… *
Quick reference guide on the value of Nursery Rhymes, highlighting Language, Cognitive, Physical and Social/Emotional Benefits
How to Develop Reading Skills
*Statements adapted from Kindermusik International