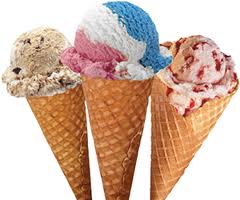 In 1984, President Ronald Reagan proclaimed July as National Ice Cream Month. He called for all people of the United States to observe these events with “appropriate ceremonies and activities”.

Sure, ice cream is not exactly health food, but did you know that ice cream can be a source of protein, vitamins B2 and B12, and calcium? Add some berries and walnuts and you’ve nearly  got the whole food pyramid in your bowl!

Just because your body doesn’t tolerate ice cream well doesn’t mean you have to skip all the fun. Sherbet, sorbet, frozen yogurt, gelato and soy ice creams can be just as delicious and refreshing, and can even be enjoyed out of a cone – so you won’t be missing any of the fun.

Why not host your own old fashioned ice cream social? Head to the farmer’s market for some in-season goodies (peaches and cherries are perfect right now!) and churn up a batch of homemade deliciousness. Here’s a crowd-pleaser of a recipe:

1. Whisk together first 3 ingredients in a large heavy saucepan. Gradually whisk in milk and whipping cream. Cook over medium heat, stirring constantly, 10 to 12 minutes or until mixture thickens slightly. Remove from heat.

5. Meanwhile, melt butter in a small skillet over medium heat; add pecans, and cook, stirring constantly, 8 to 9 minutes or until toasted and fragrant. Remove from heat, and sprinkle with 1/4 tsp. kosher salt. Cool completely (about 30 minutes).

6. Pour chilled cream mixture into freezer container of a 1 1/2-qt. electric ice-cream maker, and freeze according to manufacturer’s instructions. (Instructions and time may vary.) Before transferring ice cream to an airtight container for further freezing, stir in pecan mixture.

*Vanilla extract may be substituted.

Not in the mood to make a mess? Load up the kiddos and head to your favorite ice cream spot. Have you been to Wild About Harry’s?  They made the Top Ten List of best places to get ice cream in the US!

Keep it super simple and get some cones and ice cream at the grocery store and plan a family walk around the block while you eat your ice cream cone from home.

Any weary moms out there need an excuse for a spa day? The Spa at Luxe Stoneleigh is celebrating the Ice Cream Month in a fancy way. During the entire month of July the Spa will be offering delicious Ice Cream Sundaes when you book an Ice Cream Manicure or an Ice Cream Pedicure (see their website for details).

No matter how you celebrate, be sure and participate in the most tasty American holiday. I scream, you scream, we all scream…let’s all stop screaming and eat some ice cream!

This post brought to you by Jenny Leggett, who is partial to a small dish of rocky road, if you please.