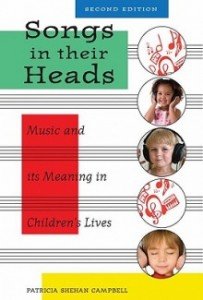 As Kindermusik educators, not only do we enjoy helping your children learn, but we love to keep learning, too! We all have many books that we love to read and share with each other and we’ve started a list here.

More recently, I read this wonderful book called Song in their heads –Music and its meaning in children’s lives by Patricia Shehan Campbell. I believe that this book delivers a very important message about the true nature of children; one that should be shared with everyone.

In her book Mrs. Campbell interviewed children from different ethnic and socioeconomic backgrounds. She videotaped, observed and documented their behavior in different casual settings such as play areas and riding the bus. Mrs. Campbell was able to transcribe into written music the songs and improvisations performed by the children at play. She found that independently of talent, the rhythm and tonal intricacy of their music was surprisingly complex. Their musical improvisations were at many times inspired by their heritage, suggesting cultural imprinting.

Based on her findings, Mrs. Campbell promotes that children be instructed in music at a young age, and the continuation and expansion of art and music education at all school levels. This will not only help to develop the inclination for music in children but will help improve all other areas of learning throughout the early stages of development and beyond. In some countries especially in the United States music has been considered a special talent restricting music education for those with aptitude, depriving too many children of the benefits of music. As she pointed out, “What children musically do and say is the launch for their further development…”

Reading this book has strengthened my belief in Kindermusik. Mrs. Campbell’s findings on the musical nature of children are very much intertwined with the Kindermusik mission and principle “a good beginning never ends.”