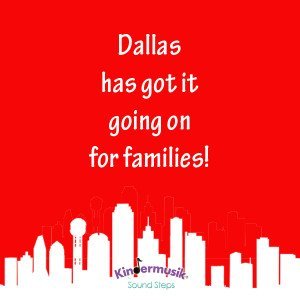 Anybody else notice what’s going on around here? By here, we mean Dallas. And by “what’s going on?” we mean the evolution of our little neighborhoods into THE destination for families. Dallas is a big place, but right here—in Dallas proper—we have multiple world-class activities, destinations, and resources that are truly unmatched anywhere.

This came to our attention recently because we won another Best Music Class award, this time with Red Tricycle. Now, we don’t put a lot of stock in these awards but as we look over the other local winners as well as winners in other big metro areas, we had to stop and say, “How did Big D become such an awesome place for children?!”

Isn’t it nice, too, to be right in the middle of a big city and still feel the closeness of a neighborhood for your children? It’s practically guaranteed that when you’re in Lakewood, Preston Hollow, the Park Cities, and Lake Highlands and go into the grocery store, you’ll always run into someone you know? As my aunt used to say, “Never go to the store without some lipstick.”

But let’s just name a few of the world-class adventures for children right here in our backyard (and yes, for some of us, these are practically in our backyards!)

Not only do we have an in-town lake and paths everywhere, the Dallas Arboretum borders White Rock with this huge expanse of nature that’s kept beautifully year round. But they didn’t stop there–the Dallas Arboretum is perhaps the most kid-friendly place in town with lots of room to run and roam, stroller-accessible walking, frogs to frolic in on a hot day, and children’s festivals that cater to the 5 and under set more than 20 weeks out of the year! Why, there’s even Kindermusik playtime included with admission! And it goes without saying that the new Rory Meyers Children’s Garden is mind-blowing and there’s nothing like it…in the world! Come play with Kindermusik sometime on the big rolling lawn overlooking the lake.

Animals and Sea Creatures: Dallas families can enjoy every animal on land AND under the water! Our TWO aquariums (Dallas World Aquarium and Children’s Aquarium at Fair Park) provide great indoor fun and totally different experiences like feeding birds or stingrays, otters, monkeys, a jaguar…! The Dallas Zoo played second fiddle to Ft. Worth for years, but Big D wouldn’t be outdone. Easy to access by a fun ride on the train (Dart rail is a destination in itself) or a quick trip in the car, there is so much space to explore and learn.

Perot Museum One of our Kindermusik dads confessed recently that he loves this place so much that for HIS birthday, he took the day off and went and played. This is no ordinary quiet, passive “museum.” The Perot is all hands-on, cutting edge innovation.

Fair Park’s venues are rarely crowded. The Butterfly Garden (with tea parties, even) is great fun. And what family doesn’t love the State Fair. There’s nothing like it—anywhere!

Klyde Warren Park Um, they covered a freeway and managed to create this beauty of an urban gem? The playthings are simple, good for a variety of ages and more aesthetic than a typical playground.  And aren’t our children lucky that they can even take a trolley ride to get there! 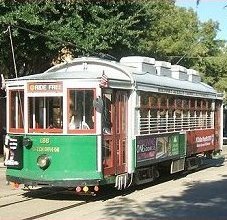 Dallas Schools: We may have different options on public versus private or best preschools, but one thing can be said with confidence, the schools here are top notch. Learn more at our upcoming discussion night Navigating Schools in Dallas with Kindermusik.

Shopping: You name it, we’ve got it. Whether you prefer a thrift store or boutique, there’s no lack of places to outfit your family. But where else can you leave Kindermusik, go across the street to Northpark Center, and go to a free public library, Bookmarks Public Library?

The arts: DSO, DCT, DSM, DMA, Performing Arts Downtown (ATTPAC), the Nasher, too many acronyms to list. All these venues have Family Days and some offer free admission for children.

Places of faith and resources: Whether top-notch hospitals, MOPS groups, preschool associations, or parenting resources like ECI, Dallas has that covered.

Kindermusik We’ve been around nearly 17 years but stay under the radar, conveniently tucked into Dallas neighborhood locations. Every city needs a place for parents and children to sing, dance, laugh, and love week after week and we’ve gladly met that for Dallas. Thank you for trusting us with your family’s musical adventures.

This post brought to you by Miss Lisa and Co.