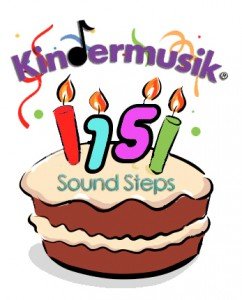 Whoops! I forgot a big anniversary. Not my own, that’s coming up (“Mr. Lisa” and I will celebrate 11 years in June.)

Nope, I forgot that 2012 marks the 15th year of Kindermusik by SoundSteps. What’s that you say? “Miss Lisa, you must have started this when you were but a babe yourself!” Alas, Miss Lisa isn’t getting any younger. In fact, the first Kindermusik class from January 1997 will be going to college next year. (Yikes!)

So here’s a little background of how it all began. I’m from California and planned to teach high school music (another Yikes!) During my teaching certification program, I realized I could venture out a bit before settling into a teaching career. While some would choose Peace Corps or backpacking through Europe, I chose a Masters Degree in Music Ed, far away in the Carolinas (where I have aunts, uncles, cousins and grandparents).

During the course of that Masters work, I quickly realized that high school wasn’t the way to go and in fact, elementary music ed wasn’t for me either. Instead, I concluded that because music education seemed to be falling out of schools, there was a need for music education in alternative and private settings. I connected with a professor who recognized this as well and I wanted to learn more So I finished my Masters of Music Ed at Appalachian State and headed for Dallas to pursue a Masters of Theology at SMU so I could study with him.

That first fall in Dallas, I taught elementary music and it took me all of a month to decide that I needed Kindermusik in my life. I had heard about Kindermusik while I was in North Carolina (it’s headquartered in Greensboro). So during that first fall of teaching school, I immediately became a Licensed Kindermusik Educator and started my first class in January of 1997.

It was at the St. Thomas Aquinas Preschool, before the “new addition” with St. Anne’s was even there! The first class had just four lucky children, but they were dedicated.

That summer, Kindermusik introduced its first summer camp and we grew from four to six. That fall, we kept six and by Spring, we were ready to add a second class! I continued to teach elementary music for a total of three years and completed the Master of Theology during that time as well. After that, I went full time into Kindermusik and before I knew it, I was adding locations and educators with me.

We are proud to boast that we are ranked the 2nd largest Kindermusik program in the US (our friends in Seattle are #1). We are also proud that we donate our time offering weekly classes at Vogel Alcove Preschool for Homeless Children.

Join us on May 19 as we celebrate our 15th year by saying a huge thank you for your support. Our annual Family Appreciation Day Picnic will feature train rides around the parking lot at Our Redeemer Lutheran, balloon animals and popsicles. Bring a snack or a picnic and bring a friend—it’s free. Your child’s favorite Kindermusik educator will be there giving out free hugs, too!

This post brought to you by Miss Lisa who might just wear a party hat all year long. 😉