Meet Raul and Christy, parents of Michael! Michael came his first class at 9 months old. Christy and Raul have seen that Kindermusik enabled Michael to be more in tune with his musicality, as well as his overall growth. Since he started at a young age it has helped with his motor, listening, social and verbal skills. They’ve noticed that he is more musical.

“Music affects his moods and inspires him, so much that he makes his own tunes out of the blue. We believe he is a better listener and communicator because of Kindermusik.”

“Kindermusik is a safe and loveable environment where your child is allowed to grow in all areas not just music. A place to help create a very important bond between parent and child that will last a lifetime. A great music program with great, loving teachers that go above and beyond to get your child ready emotionally and verbally for the future ahead of them. We love it and we are proud to say we are part of a great community.”

Michael’s favorite songs never seem to get old (to Michael, at least).

“There are a couple of songs that to this day he sings. The washing machine (“We are all stuck in a washing machine…”); and his favorite “Toast, toast,” which he still sings a lot, and the goodbye song (he sings that quite often.) He 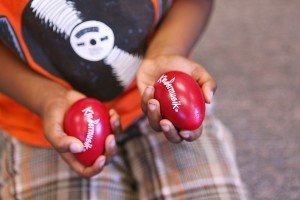 loves the stories about Shiny Dinah and Go-Van-Go.”

Miss Lisa recalls the classes where children were asked what they enjoyed eating hot. Michael would always insist on singing about couscous (which he apparently had eaten just once, but always had to sing, “Hot, hot couscous.”).

“As parents, the ‘Toys away’ song was so helpful. We really enjoyed it because it taught him to clean up his toys after playing. We still to this day use the same song to pick up. And as a mom, I learned how to approach other mothers, interact with them because our children have grown up together in Kindermusik and in a way we created a small community of Kindermusik parents.”